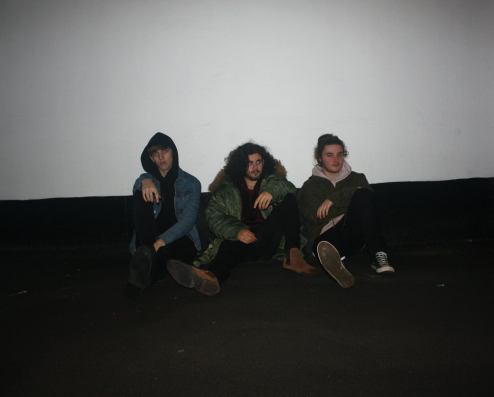 Big Sleep is the latest audio offering by Strangers, a three-piece from Widnes, Cheshire. The song follows on from other well-received tracks, Hibernate, Lucy and Falling.

The band are cementing a name for themselves as having a sound unlike any other. To give them a summary genre of their sound, I’ve have to choose dream-indie-pop/rock as their songs have a sometimes dreamlike sound with softly-played bass and guitar, with vocals resonating throughout with tons of reverb. Their songs are very reminiscent of a late 80s/early 90s sound which resonates well with me for one. Big Sleep is carrying on that sound, but also gives us diversity in the way it is produced and performed.

The song starts out with a slow clean guitar riff which gradually brings us into the vocals provided by Liam McGrath. The vocals and guitar give a feeling of the song being performed in a hall or similar venue. The verses are very easy to listen to with the subtly played clean guitar, expertly played bass, courtesy of Sean Goddard and drums, from Jamie Griffith.

As the song goes into its chorus the vocals double and instruments intensifies giving the ethereal feeling during the chorus more impact and coupled with the catchy chorus, the song itself gives us, the listener another side to the song. There’s a great guitar riff at the halfway point with reverb, giving the song a climax point sending the song to another level.

The song winds down in a similar sense as how it started. Overall, Big Sleep is another quality release from Strangers where they have again captured that dreamy, out of this world sound, which captures a feeling of a time since gone, but also feeling modern and fresh at the same time. The song differs from previous songs where, while still being dreamy the the past songs seem more heavier, where this one showcases a more gentle side to their song-making. I personally cannot get enough and look forward to their next release.

Have a listen for yourself below and check the bands socials via the links.

Many thanks to Iain at Softlad Promotions for sharing with review with us.
Check out all of their events  across Widnes, Frodsham, Liverpool and Northwich here.