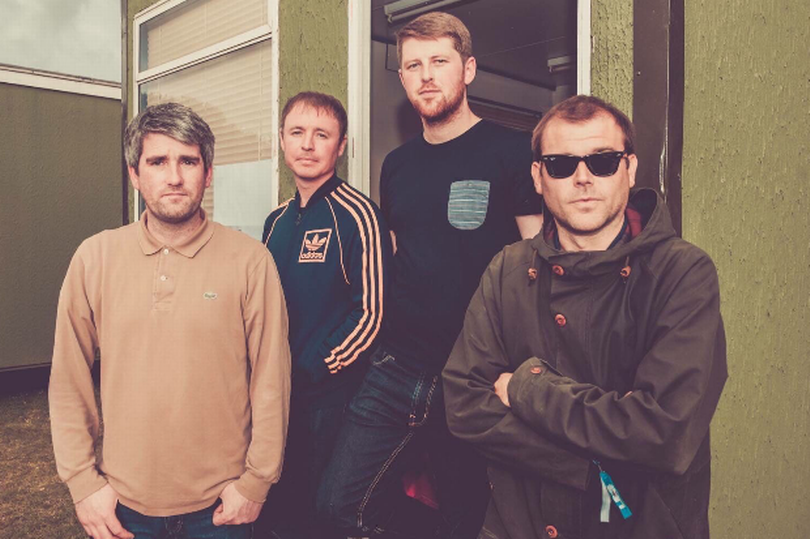 Having played in front of 800 hometown fans in November, one of the north west’s most hotly-tipped bands and Liverpool “biggest secret”, The Tea Street Band are set to play an intimate show in Warrington.

With an euphoric rush of sound mixing Balearic dance beats with the unmistakable Liverpool indie sound, They are like nothing you’ve heard before. The Coral meets New Order perhaps? But even that doesn’t do the quartet justice, to do that, you need to go back to 2002…

Originally forming as The Maybes? Liverpool went crazy for the band with their name notorious for being tagged on walls throughout Anfield and Kensington, and in the proper rock & roll style, burned out before their potential was fulfilled. A minor reshuffle of the decks and a deeper exploration of an electronic sound, saw the debut album for The Tea Street Band come out in 2014 gaining support from tastemakers such as Huw Stephens, John Kennedy, Clint Boon, and Rob Da Bank, and saw the mersey rockers travel as far as Australia and South Korea on promotional duties.

They would go on to play main stages at a host of British Festivals including V Festival, Reading + Leeds, Latitude, Kendal Calling and tour alongside The Charlatans.

Recorded over a year in Liverpool’s fabled Parr Street Studios with Chris Taylor (Ian Brown, Millburn), ‘Frequency’ is the 2nd album for the cult band and sees a a big leap forward for The Tea Street Band. Speaking to Sound City Festival Director and Bassist Nick Otaegui, it seemed to be an easy choice to record in their home city:

“At this stage of our lives its hard to get the time away, jobs, families, mortgages etc have to come first. So the fact that we have word class recording studios with amazing producers, constantly making amazing records, makes it a no-brainer. We’ve recorded different bits in Parr Street for nearly 20 years and we’ve been friends with Chris for near enough the same. It was a natural process and I think the results speak for themselves”.

The writing process was different than the first album, says frontman Timo Tierney. “We wrote it together, with all of us having a massive input on each song, the title and the artwork. It’s all of ours. We have all pushed each other musically and that can be heard on songs like ‘Sacré-Coeur’ and ‘Marseille Blues.’”

Like any great second album, ‘Frequency’ is the sound of a band who have found their sound whilst constantly pushing for more. They held their album launch at Liverpool’s
‘District’ venue, which saw almost 800 fans in attendance over two nights in November

“Liverpool is always a crazy gig for us, the crowd are always up for it like nowhere else. Everything came together. The music, the crowd, the lights show, the vibe in the venue. Next level gear.”

After playing together for the best part of 20 years together across different projects, [WAM] asked Nick how hard it was to keep the thirst going and ensure they they do not lose any motivation: “We’re feeling fresh and as tight as we have been in over 15 years. We encourage and inspire each other, to carry on, to finish a song, buzz off each others riffs. Then the obvious, family, friends the city we live in. We’re blessed with an abundance of good vibes around us. Plus I think at this stage, life has thrown a lot at you.
So we’ve got a lot of personal experiences to draw upon and write about.”

Prior to the first album coming out, Tea Street had previously played Friars Court, personally invited by Clint Boon but other than that, the four-piece will be performing in a town with a new music scene to experience and embrace “No expectations. Just get down and lets get it on, together!”

Frequency could be their opportunity to go from ‘Liverpool’s best kept secret’ to players in the national indie scene, and ask that you join us at [WAM] Festival to see for yourself.

The brand new Album ‘Frequency’ is out now on Modern Sky Records.
Find the band at The Auction Rooms on Friday 15th March, supported by FEZ and Pacific.
Tickets on sale now priced at just £12

Read more from of the magazine online here

Want a physical copy of the magazine send to your door? Just pay postage

🔥 JUST ANNOUNCED // We are absolutely delighted to announce we will be hosting the official after party for @starsailorofficial after their sold out show at the Parr Hall next month!
🔥 NEW SHOW // Fast-rising iconic indie champs @thelathums are making a quick return to Warrington after a riotous Neighbourhood Festival appearance earlier this month and have announced a special album launch show at @fc2_warrington / , Sunday October 24. Tickets go on sale Friday 17th September.
The very best of luck to our hometown superstars @seagothband & @crawlersband who will be making their @isleofwightfest debuts this weekend! They’ll be joining @theksofficial who are opening the main stage on Saturday! Loads of great bands we’ve met or watched over the years on show courtesy of @thisfeelinghq , be sure to check out @thelilacsofficial , @themrats & @theskinnerbrothers too! #IOW #IsleOfWightFestival #theksareonfire #musicfestival
Our hometown heroes @theksofficial & @crawlersband did us proud at #NeighbourhoodWeekender!
Two for Tuesday! @thebluebell2021 & @friarscourt both have open mic nights a little later on,
Things are shaping up nicely for @nbhdweekender which starts this Friday! Note the VIP section moving to the left of the stage as opposed to in between the main stage and #violabeach stage. Getting excited now! Swipe for full map. #musicfestival #nbhdwknd21 #warrington #catfishandthebottlemen