Warrington’s newest music venue is promising to nurture the next generation of bands and artists from the town as well as bringing in amazing talent from across the country.

Formerly operating as Rag & Bone, the building was completely refitted ahead of a grand opening in April. Billed as the town’s only dedicated live music venue, it has already had unforgettable sets from the likes of Jeramiah Ferrari, Witch Fever and Average Joe with the 250 capacity space benefiting from a fantastic house PA and sound engineer.

Events Manager, Charlotte Davies alongside Venue Manager Greg Dixon. known to many through his work with God Complex & Psymmetry Collective have over 20 years of music industry experience between them are striving to make the Barbauld Street bar the place to be.

On her reasons for joining the LiveBar team, Charlotte who formed DJ collective Thirsty Girls as well as working in both PR and events told us it was conversations with parents and older friends that inspired her to get involved: “They’d tell me about when they saw the likes of Blur, Manic Street Preachers and The Fall in Warrington in the past, and there’s so much amazing talent around the country at the moment, we want to create a place where people can catch the newest bands before they hit the big time”.

We’ve been involved in the industry since our teens, [so] we are positive that we can make this venue an exciting destination for fans”.

Like many new ventures, the biggest challenge is gaining a greater public awareness, and convincing people to experience upcoming artists. This has led to the launching of a brand new unsigned industry networking event, which will take place every Thursday. It acts as an informal opportunity to support live new music and meet other musicians and
those within the industry.

There’s much to look forward to when it comes to LiveBar in the coming months, “We’re
looking at really diverse and interesting line up of gigs getting booked in. There’s lots of great venues in the town that put bands on, but there’s a gap in the market for a 250 capacity venue that can accommodate those touring bands about to break through.

“Having Joe Talbot (frontman of IDLES), playing a DJ set after local bands The Lotts and Slowhandclap was obviously a huge highlight as Greg and I love that band and that got people talking. We’re determined to turn Warrington into people’s new favourite gig destination, and we’re working really hard to get a really diverse and interesting line up of gigs booked in. We’re still toying around with a lot of ideas, but we want to bring a real cultural hub to the town centre”.

Friday 5th July – Nile Marr
We’re very excited about this gig. Nile Marr is the son of Smiths guitarist Johnny Marr, but he’s an incredible musician in his own right. He released an album under the name Man Made a few years ago but he’s currently gearing up to release a second under his own name. I’ve seen him play a few times around Manchester now and he’s always a complete joy to watch and to listen to.

Friday 26th July – The Bright Black
I discovered this band a year or so ago and they’re doing some really interesting things. They’ve got this really nice, summery, indie-pop vibe and they’ve been building up a lot of interest around Manchester lately. They’re certainly one that you’ll regret missing in a smaller venue like ours when they hit the big time in a couple of years.

Saturday 27th July – Sky Valley Mistress
Sky Valley Mistress played our opening night and they absolutely tore the roof off so we’re so pleased that they’re coming back for a headline gig. If you’re looking for some loud rock and roll then this is the gig to be at for sure.

A version of this feature originally appeared in July’s copy of [WAM] Magazine.
Want a physical copy of the magazine filled with a huge number a
features, reviews and news, sent to your door? Just pay postage 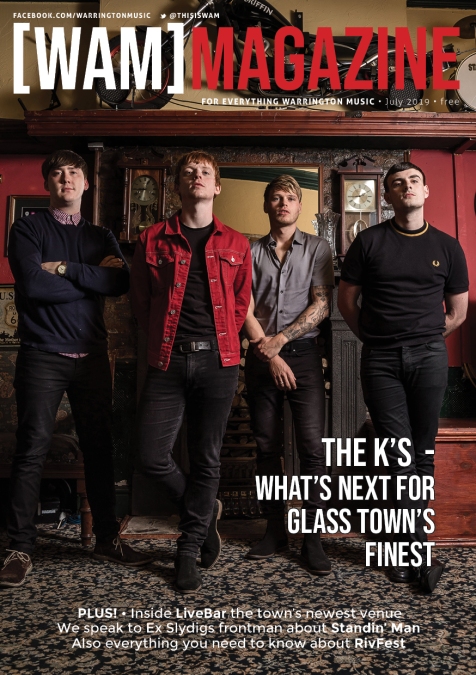 What’s your first gig that you’re going to this year?
We are very happy to announce our first guest in the WAM Exposure studio next week will be none other than @marcus_man_music It's the first time in almost 7 months we've been able to have guests in with us, so we're very pleased!
WAM Exposure GOOD NEWS/ BAD NEWS
🚨 JUST ANNOUNCED 🚨 Here is the brand new A-List for local artists to be played throughout the next fortnight on @radio_warrington . We aim to play at least one a hour (unless it is a specialist show). Which of these is your favourite!?
A shout out to all those who support local music in their area.
Yesterday @crawlersband surpassed 10,000 streams on their latest single, 'Statues'.