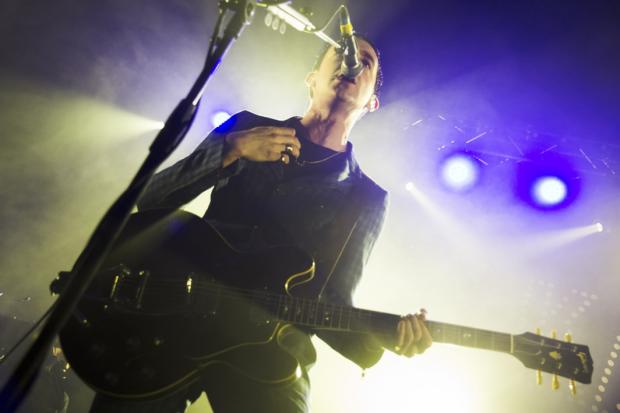 So Miles Kane coming to Warrington is a big thing. Tonight will be the third year in a row he has played at this venue. We’ve seen the Parr Hall hold some legendary acts such as: The Rolling Stones, Beady Eye, Arctic Monkeys. This venue is quite iconic, and the atmosphere was certainly boiling and the crowd was most definitely willing to be charmed by Miles.

The night started off with The Telegram, who were the sole support act for the night, and to be frank, they were woefully dull, their sound was lost within the venue, and the energy they expressed on stage wasn’t transferred to the crowd who watched on simply waiting for Miles Kane to come on. Their set was unimaginative and as a support band, it’s your duty to do everything you possibly can to get the crowd going and to win over as many fans as you possibly can. The Telegram definitely didn’t achieve this and left me wondering why Miles Kane couldn’t have picked a better support act.

As the Telegram went off the venue was slowly filling, the atmosphere getting more rowdier, waiting patiently for the ‘Wirral Riddler’ to show up with all the energy he harnesses on stage and to blow the crowd away. As the opening music came on for Miles the crowd had suddenly awoken and was well ready to really kick start the night off, from the moment the band had played the first few notes of ‘Inhaler’ the energy around the room as electric and extremely rowdy. Miles Kane with his swagger had completely won the crowd the moment he stepped on to the stage and it was instantly a night that was going to be full of sweat and a lot of loud singing. A few songs in Miles churped out classics of his being ‘King Crawler’ and a single of his latest album ‘Better Than That’ which got the crowd bouncing around the room.

The set was full of well known singles, ‘First Of My Kind’ was broken into and the crowd was non stop singing and bouncing along, enduring and taking in everything that Miles was giving them. He then broke in to an Arctic Monkeys B-side he had tracked with them from the single ‘The Hellcat Spangled shalalala’ and although the crowd did not fully recognise the song, still enticed their selves into it.

Throughout the gig, there were multiple choruses of the whole crowd singing happy birthday to Miles Kane, as it was the singers birthday the day of the gig. The Parr Hall erupted into a thunderous amounts of applause after they had sung to the ‘Wirral riddler’ and just rounded up what the whole night had been like. It was a distinguished performance from Miles and felt right at home.

Towards the end Miles saves the best till last breaking into a very long rendition of ‘Come Closer’ which he then got the crowd to sing back to him causing the whole venue to erupt. He then whipped out ‘Rearrange’ before leaving the stage, oozing with coolness.

Leaving the crowd waiting for the typical encore that happens at every gig nowadays he came on for a slower song and for the ladies to get on peoples shoulders and played ‘Colour of the Trap’. After this the crowd eagerly waited what had to be played, and Miles broke into ‘Don’t Forget Who We Are’ the lead single from his second studio album. The crowd still full of energy broke into complete madness.

Miles walked off the stage with the crowd in his hands, and he had completely conquered the Parr Hall, and could definitely be hailed as one of its finest gigs.