As well as a thriving live music scene, Warrington also plays host to a whole load of dance events from various promoters and venues.

Whilst the likes of The Carlton Club and Legends have become, well, legendary the town has embraced Creamfields coming to its door step in 2006 and there’s something for everyone throughout the year.

With nights across the town centre, one of the most popular nights are run by the ‘Behind The Groove’ collective and this February, Manchester heavyweight Luke Unabomber joins them for their first courtyard party of 2020.

Serving up a tough gritty sound with a global influence, his no nonsense policy to DJing ticks off all the boxes for the usual Behind the Groove shindig.

We spoke to founder, Rob Thorpe about how own experiences in dance music and what to expect on Saturday 29th February. Tickets are available here, priced at £3.50.. 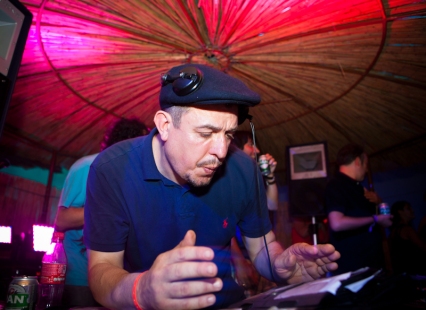 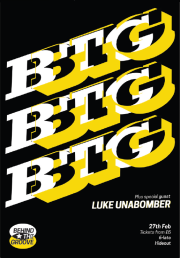 You have Luke Unabomber (founder of Electric Chair, Homoelectric) as special guest this month (29th Feb), must be looking forward to bringing him to Warrington? What can we expect from his set?
I can’t lie that Luke’s party Electric Chair has been a big influence for Behind the Groove.

After picking up one of the original Electric Chair compilation albums whilst in Amsterdam I’ve been a fan of his DJ sound which stretches all corners of the planet.

His punk life and old school ethos to night life match the small and local party Behind the Groove party is too.

How long has BTG been going for and why should be people head to one of your events?
After throwing parties for the past three years we can proudly say that BTG (along with other DJs and promoters) have brought back some culture to Warrington’s “Cultural Quarter”.

Whether you’re a music head, a sesh head or even a knob head you’re likely to wake up the day after a BTG and realise Warrington isn’t that bad after all.

A BTG party ticks off all the boxes a club night should include such as a local crowd, local DJs and a sound music policy which pretty much covers every genre nowadays (Except Tech House).

When did you start DJing – and what or who were your early passions and influences?
Amsterdam was my gateway into DJing and buying records. After moving to the city for work I spent my free time visiting its various record shops and going to its top notch clubs on the weekends.

Along with my full time job I scored a weekend/weeknight job at Zwart Goud records just off the red light district in the city centre. After my shift the shop owner let me pick records from the crates and let me practice on his turntable and that’s where the love began.

What is it about music and/or sound that drew you to it?
Coming from an indie/alternative background I was always blown away with how club music (house, disco, electro etc) was more psychedelic than actual psychedelic guitar music.

Throw the whole culture into the equation and clubbing really opened my eyes to a completely new (and much much better in my opinion) world of music.

Behind the Groove have had events at a range of venues across the town, what is it you enjoy the most about returning to Hideout?
If it wasn’t for that courtyard I don’t even know if behind the Groove would still be going so it’ll always be a special place for us.

We’ve definitely adopted it as our home base so it’ll be good to be outside there again after what feels like an eternity away from it (5 months).

Who are the DJ’s who make up BTG?
Ryan Wilkinson – Italo Disco Don – Warrington’s finest spinner of High Energy Italo and Chuggy Disco.
Naomi Flaherty – Party Animal – Heavy beats all night long but not afraid to drop an 80’s anthem.
Ben Jackson – Captain cool – Spins tunes with that much heat he’ll make you feel like you’re in the Costa Del Warrington.
Saul Wilson – Silent Assassin – Bringing the funk to Behind the Groove since day one.
Rob Thorpe – Can’t do bios for yourself.

What is it that you love about the nightlife/clubbing scene?
It sounds really cheesy but there really is a positive vibe with the party crowd. There’s something pretty special seeing people who work their arses all week just letting themselves go on the weekend and loving it.

Dance music has exploded again in popularity over the past five years across the country, especially in Warrington in part down to the relocation of Creamfields. How have you noticed things changing in the town and where is the scene is headed?
After speaking to the Godfathers of the Warrington scene about the past (Yes Diddy and Woody) I can happily say that things are healthy right now. With parties such as Mezzanine, Giraffe, Subrosa, Masterworks and ourselves all bringing their own approach to the town things can only look even promising for the scene in Warrington.

With the latest refurb of Lizard Inc records and a change of direction for Hideout and its infamous courtyard expect an even bigger Summer for Warrington.

What are your hopes/ plans for year ahead for Behind the Groove? Five years from now?
If it ain’t broke don’t fix it. We will just keep carrying on the parties in Warrington and maybe invite some of our favourite DJs to town in the future…

What is it about DJing, compared to other outlets that makes it interesting for you?It’s a weird one as the role of what a DJ actually is constantly morphing into the unknown (Too many DJ/Social Media influencers nowadays!).

But if you look at it for what it’s meant to be (the middle man between the tunes and the people) then I find it interesting being able to set the tone of what type of night punters will be having from your tune selections.

The fact it’s not all eyes on the DJ (especially at Behind The Groove) also makes the nights more about the people attending instead of some demi-god behind the DJ booth.

All photos by Matt Price