The Spike Island 30th anniversary gig has officially been postponed by organisers, as the UK continues to battle coronavirus.

Spike Island: The Resurrection was set to take place on May 16, 2020 to mark 30 years since the Stone Roses’ legendary gig – with a bill of tribute acts performing on the same site as the original show.

In a statement, organisers confirmed the event will now move to Saturday September 12 instead.

A second coming in its truest form, next year the UK’s No.1 tribute to The Stone Roses will take to the stage at that infamous Widnes island in what will be the only live performance to have been held at the site since that momentous day in 1990.

Topping the bill, THE CLONE ROSES will be putting in a headline performance that promises to emulate the Roses’ legendary set to a T, from the classic setlist, to the vintage apparel, and the euphoric atmosphere that made for an unforgettable moment in history.

The headliners will also be joined by a stellar bill of acts hand-picked to pay homage to the iconic Madchester years of which Spike Island was undoubtedly the pinnacle. With supporting sets from fellow top-tier tribute acts including: OAS-IS, THE SMITHS LTD, HAPPY MONDAZE, THE JAMES EXPERIENCE, and TRUE ORDER, the essence of the era will be palpable and pumping throughout the day. 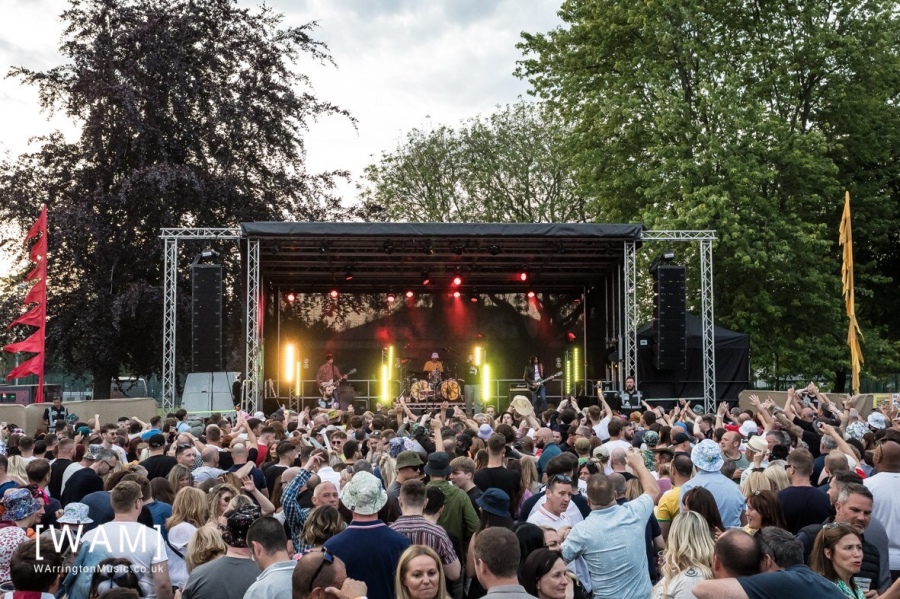 The Clone Roses headlined the very first ‘Glastonferry In The Park, in 2019. 5000 people attended the one day event in Bank Park (photo: Jon Lingwood)

Giving their blessings to the occasion, ‘Spike Island – The Resurrection’ will also see a number of original faces from the Madchester scene making an appearance at the 2020 event. With DJ sets from Inspiral Carpets man CLINT BOON and Happy Mondays maverick BEZ sure to bring back memories for many in the audience; it will be a case of pure deja vu for ANDY (808 STATE), Hacienda DJ legend DAVE BOOTH, and Dust Junkys rapper MC TUNES, all of whom performed at the 1990 Spike Island. In addition, Manchester DJ and Radio host Dave Sweetmore will host the day’s proceedings.

Speaking about ‘Spike Island – The Resurrection’, Baggy, bassist for the Clones said:

“The prospect of performing on the exact same site as The Stone Roses played their now legendary show is almost unbelievable. Growing up only a few miles from the original site on the Mersey estuary we were all brought up on the tales of that day. I’ll admit I was just a little too young to attend on the day but if you believe what folk say around here it appears there was closer to 330,000 rather than 30,000. We hope to give the veterans a nostalgic trip down memory lane as well as a chance for younger Roses fans to experience just some of the magic of that day 30 years ago.”

“We have received a draft licence application for this event. Those in Halton and beyond – who still recount with enthusiasm their memories of 30 years ago – will be joined by many others who are excited at the prospect of recreating the legendary concert at Spike Island.”

The Clone Roses are the longest serving and best selling Stone Roses tribute act in the UK. Since their formation, Roses fans have been adoring the Clones’ expertly executed renditions of classics including “Waterfall”, “She Bangs the Drums”, “Made of Stone”, “I am the Resurrection” and many more. Hailed by Stone Roses bassist Mani as “the second best Stone Roses in the world”, the Clones have earned an outstanding reputation for their attention to detail, from the amps and setlists, to the clothing to swagger; they were even selected as the official Roses tribute choice for Isle of Wight Festival and Kendal Calling festivals. Regularly performing at some of the UK’s best and biggest venues, The Clones have conquered the stages of Manchester Academy, Nottingham Rock City, Shepherd’s Bush Empire and O2 Academy venues nationwide to huge crowds. However, in paying homage to all eras of The Stone Roses twisting career, it seems there is one defining moment that still eludes them….

Held on the Whitsun Bank Holiday in 1990 on a largely unused, man-made island in the Mersey estuary of Widnes, Cheshire, The Stone Roses at Spike Island is regarded as one of the most famous gigs the UK has ever seen. Taking place at the height of Madchester and located slap bang between the thriving music scenes of Manchester and Liverpool at that time, the event  signified a coming together of tribes, the peak of Roses-mania and the moment that would define a generation. Headlined by The Stone Roses shortly after the release of their seminal s/t debut album and at the pinnacle of their powers, the band performed to some 27,000 fans who had descended on the Island from all corners of the country and beyond. Support on the day included sets from a Zimbabwean drum orchestra and reggae artist Gary Clail, plus slots from legendary DJs of the period including Paul Oakenfold, Dave Haslam, MC Tunes, and Frankie Bones. Often cited as “Woodstock for the Baggy generation”, Spike Island is now written into the very mythology of UK music and a prominent footnote in The Stone Roses’ legacy; a feature-film ‘Spike Island’ was even made about it in 2012.

A once in life-time event? Perhaps not. 30 years on THE CLONE ROSES invite you to re-capture the magic of that most famous of gigs as they celebrate it with: ‘Spike Island – The Resurrection’.

Tickets are priced from £27.50 and are on sale now

Celebrating the 30th Anniversary of The Stone Roses Show

PRAISE FOR THE CLONE ROSES

“I can’t believe it’s not butter, the second best Stone Roses in the World”

“The Clones have long been the best” 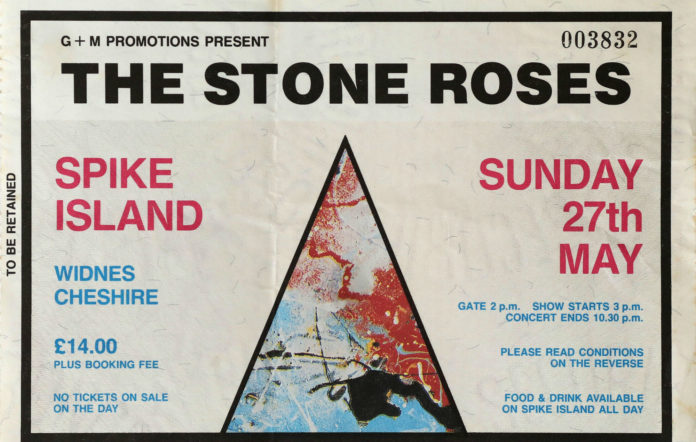 It’s Thursday so that must mean it’s time for another WAM Exposure over on @radio_warrington . Tune in 6-8pm to hear new music from the likes of @scottlaywood1 , @pnixonmusic & @abirosekelly . No special guests in the studio tonight, just two hours of great music from Warrington, Widnes and Runcorn. Hope you enjoy the show! #localRadio #CommunityRadio
Happy two year anniversary since the best #WarringtonMusicFestival yet! Every band blew us away and sad that we won’t have another one this year. Hopefully next year 🤞Headliner by @winachi_band just a couple months after their #WAMfestival headliner, they performed to thousands in their hometown alongside 21(!) other artists from the town. Who were your favourites on the day? 📷: @lee_harman #musicfestival #warrington #ThisIsWAM
📣Just Announced 📣 @starsailorofficial have announced the very special 20th anniversary 'LOVE IS HERE' show, to celebrate the debut album which will be played in its entirety.
It’s not stopped raining all day and you can’t hug your mates in the pub, but we’re hoping for a glorious weekend in the sun, with good friends, cold drinks and great music.
2nd May 1989: The Stones Roses released their debut album on Silvertone Records.
So fair to say @officialrivfest is back with a bang this year. Head to website to find out more. Tickets on sale this Friday via Culture Warrington website.