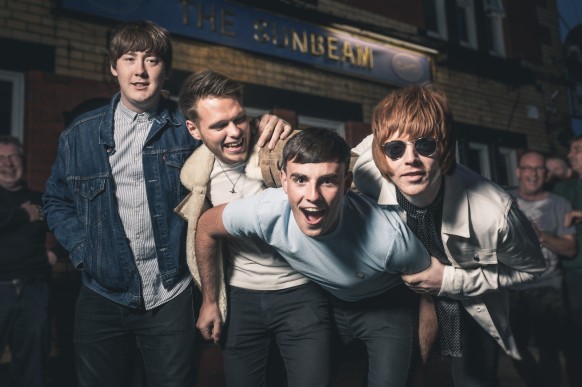 Who will join The K’s?

THE K’S celebrate the release of new single ‘Aurora’ – their first release on Creation23 – at LiveBar this September!

If you’re from Warrington chances are you’ve been hearing us go on about The K’s for a very long time. After all, they are our [WAM] Magazine July cover stars!

After years of plugging away the band have recently signed to Alan McGee’s brand new Creation23 record label – and 2019 has seen them take over the music scene.

The Earlestown quartet have made their national TV debut, appeared on festival stages all over the Europe this summer and their set at Warrington’s Neighbourhood Weekender saw one of the biggest crowds the Viola Beach Stage had seen all weekend.

The venue on Barbaulld Street are therefore thrilled to welcome The K’s to the LiveBar stage for what will be an almighty night in celebration of their new single ‘Aurora’. This single follows up releases ‘Glass Towns’, ‘Got A Feeling’ and ‘Sarajevo’; tracks which have all taken the indie scene by storm.

Support comes from two of our favourite Warrington acts – Serratone and The A.V Club.

Tickets are on sale now via Skiddle, priced at £10.

Expect some of this:

and a bit of this too

On today’s WAM Exposure, we have new music from LOADS of different artists including @prayformojouk , @markbleasdalemusic , @marcgallaghermusic , @chrismason.music & @chloejonesmusic !
Sad times for a community pub loved by generations within the town centre. Could this be one closure too far?
We are 𝑎𝑏𝑠𝑜𝑙𝑢𝑡𝑒𝑙𝑦 over the moon to welcome @askelliot to Warrington on Friday 19th November. We saw they play last month in their hometown of Liverpool and felt bad took so long to see them live!
A very happy birthday to one of the best Bass players out there, Liv Kettle from @crawlersband !
ONE week to go until @rivverband , @urbanparcs , @pnixonmusic (Full band debut) and @jamesleehindlemusic take to the stage for [WAM].
On tomorrow’s #WAMexposure , we have the incredibly talented Ed Fisher from @urbanparcs on the show. We’ll be talking all things Warrington Music, what he’s been upto, what we can expect from their set at @fc2_warrington in less than a couple weeks time and who Ed has been listening to recently. Perhaps we should even ask them for a acoustic track or two? Tune into @radio_warrington 6-8pm every Thursday for the very best in music from #Warrington, #Widnes & #Runcorn. #warringtonMusic #thisisWAM #CommunityRadio