After a 1 year hiatus the energetic Folk-Punk band Roughneck Riot will return with a big ol’ hometown knees up! And as always, they’ve got some treats in store for you with a huge line up of 8 bands! (eight!)

This Friday has seen the band announce via their Facebook page they will play a comeback show at Live Bar on Saturday 28th March 2020.

Early Bird tickets are available for £10 from the roughneck Riot website or go grab one from front man Matty at Bold Street Tattoo.

After a decade of playing and a couple of line up changes in the couple of years prior to a year long hiatus to “have a holiday”, they have consistently remained one of the town’s most favourite bands and have made their mark on the underground punk scene for over decade with their heavy, melodic sound.

Depending on which side of the stage you are standing, their bio on the website provided different conclusions on their time together. Either they draw “influence from a menagerie of folk, punk and hardcore bands… intent on highlighting socio-political issues of the 21st century to a new generation of punks”.

They’re a “completely useless bunch of reprobates clinging dearly to the remnants of our youthful enthusiasm. Whilst we now despise music, gigs and socialising in all forms, we don’t know any different and couldn’t possibly consider leading normal, productive lives. Fuelled by self-loathing and alcoholism, we’re begrudgingly working on a new album which centres around the themes of nihilism, self-deprecation and a general hatred for the human race. Catch us at a gig somewhere in the UK or mainland Europe,…drinking warm cans of Fosters and wondering why people keep assuming we’re Irish”. 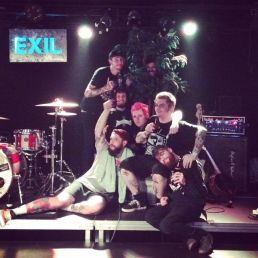 Roughneck Riot: A band that can always find that perfect pose.

All we know, is we’re very glad their back!

We are definitely looking forward to this one

And one from the archives!