Rivfest line up for 2019 has been announced and will be taking place on Saturday 28th September – Tickets on sale now. We look at why the festival so so important for musicians in the town and how a video filmed by the foundation led to one of last years headliners going on to play Glastonbury.

Rivfest is now in its fourth year. The festival first was conceived in 2016 following the tragic deaths of River Reeves and his Viola Beach band mates, Kris Leonard, Tomas Lowe, Jack Dakin and their manager Craig Tarry. River’s family and friends pulled the first festival together on the playing fields at Priestley College in under two weeks.

Tickets are on sale now via Pyramid & Parr Hall

More than 500 people came together for a memorable event and at that point Ben Dunne, River’s dad, knew that he wanted to keep his son’s memory alive through future investment in local emerging talent. This became the inspiration for The River Reeves Foundation providing bursaries to young artists wishing to pursue careers within the arts.

Rivfest 17 took the original idea and ran with it. More than 2000 people saw Maxïmo Park and Billy Bragg headline but it was unexpected moments like Joe Hill from Seratone joining Mo and 32 Tens on stage for an impromptu jam that really stole the show.

Rivfest 18 brought about a change for the festival seeing it move into Warrington town centre. The main stage was at the Parr Hall with fringe events taking place at 9 other local venues including Friars Court, The Lounge and The Auction Rooms. The move into the town centre brought a focus on emerging artists from across the North West. A showcase event at the Parr Hall on the eve of the main event put The Lottery Winners in the spotlight along with No Hot Ashes, The Bohos and Kula Bay.

“It’s really exciting for me when it comes to booking bands for the event. I get to hear so many bands and artists that I wouldn’t normally come across. I want audiences at Rivfest to enjoy their favourite local artists but I want to provide the opportunity to discover a new favourite as well. Last year I was so pleased to bring The Mysterines to Friars’. They almost blew the roof off and no-one in the audience really saw it coming. For a long time they were Liverpool’s best kept secret. Since last year they’ve gone on to support Miles Kane and have become a regular feature on Steve Lamaq’s 6Music show.
Likewise, No Hot Ashes are going from strength to strength and they are now headlining their own show at the Ritz in Manchester with their debut album ready for release. The Lottery Winners will play at Glastonbury this year following the huge success of their live performance video which was shared globally by Coldplay.” 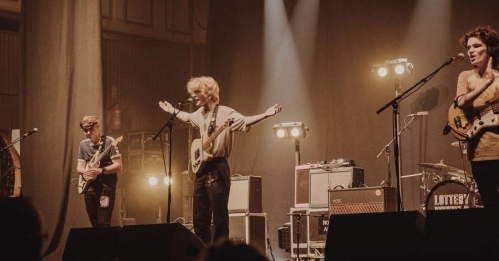 Kula Bay at The Parr Hall for Rivfest 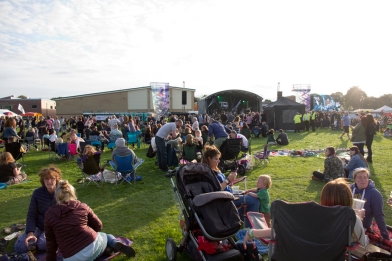 Rivfest 2017
Rivfest 19 will take place at the Pyramid Centre in Warrington on the 28th September. With 30 artists spread across 3 stages it promises to bring the same blend of up and coming artists from Liverpool and Manchester alongside local acts.

“Having everything back in one location will make it so much easier to catch more bands without missing anything” Grainger adds, “We’re doing our best to schedule each of the stages to provide something different without too many overlaps or clashes. One of the stages this year will be co-curated by Whispering Pines, a collective from Liverpool. They’ve done loads with Deltasonic and Skeleton Key Records in the past and I’m confident they will bring a new dimension to Rivfest this year along with some really exciting new bands for Warrington”.

An abridged version of this feature appears in next month’s [WAM] Magazine. Pick it up from sites across the north west in coming weeks or get yours ordered to your door now. Just pay p&p!

One thought on “What is Rivfest and why does it matter?”