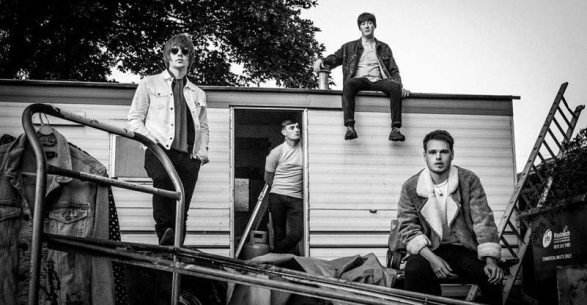 Ahead of their performance at Neighbourhood Weekender on Sunday 26th May, the Earlestown based four-piece have hit a huge milestone with their debut single ‘Sarajevo’.

The K’s made up of Jamie Boyle (Vocals/ Guitar), Dexter Baker (Bass), Ryan Breslin (Guitar) and Jordan Holden (Drums) passed 1 million streams overnight, almost year to the day since they headlined Manchester’s Gorilla venue and four months after their biggest show yet, selling out the Academy 2 venue across the city.

The band spoke to WArringtonMusic.co.uk about their rapid rise in our launch issue of [WAM] Magazine here.

2019 is set to be a big year for the band who formed in 2017 with Festival bookings as far away as Croatia and Isle of Wight this summer, and a new single being released under Alan McGee’s new Creation Records label.

As if we needed any excuse, here’s the track.

The band also joined us last year at Chilli Inc Studios for an exclusive acoustic performance of the track.

Still not enough for you?! How about this footage from their biggest headline show yet!

It’s here! Great to see local artists @crawlersband , @stanleysband and many more on this vinyl. Really regret not starting our Vinyl Record Label a few years as we love delivery day. Great work by @thisfeelinghq and @bloodrecs ! #limitedreleasevinyl #thisfeeling 204/500
“10k likes and we will drop a song lol x”
The stage is set! Live music from 10:30am till 4pm!
We are over the moon to welcome @samlyonmusic into the @radio_warrington studio for tonight’s [WAM] Exposure. She is someone’s who’s career we have watched go from strength to strength over the years and after so long not seeing her perform, we finally get to once again this Saturday at the #youngtradersmarket this Saturday outside @warringtonmkt . As ever, expect lots of meandering interview questions, brilliant acoustic sessions and new music from the likes of @crawlersband , @theracketmusic and @lucybellmusicuk ! Thursday’s 6-8pm! #communityradio #warrington #radiowarrington
Come and check out the amazing selection of young, entrepreneurial talent with a wide selection of food, drink, makers, bakers, creators and more to browse at this Saturday’s Young Traders Market, hosted outside by @warringtonmkt . We have printed off some snazzy flyers so you don’t have to miss out on who everyone is! See you in the sun! 🤞
It's a new month [almost], so it's time for a new local artist playlist, find these tracks playing all the way through the @radio_warrington 1332AM schedule for the next three weeks! Best of all, they're all brand new tracks on the A-List!