The town has been gripped by football fever, and with the unusually extended period of sunny weather, it seems everyone is willing on the the three lions in Russia. That also includes many of Warrington’s bands and artists and we asked them how they will be watching the match, how it may have disrupted plans and what their predictions were. It’s coming home.

Gareth Roberts (Man and the Echo) 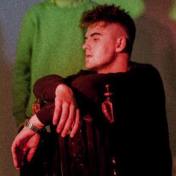 How have you been watching the world cup/ England? Have you needed to make any special arrangements to catch the games?

Andy (Delphina Kings, bass/lyrics): We’ve been trying to catch as many World Cup games as possible. We had our EP launch show on the same day as the quarter final against Sweden, and we rearranged our load-in and soundcheck to make sure we had time to watch!

Olly Thornton (Olly Thornton & The Shirts): I have definitely been watching the world cup it’s been fantastic. Especially England. I love it. And I don’t even like football. (I’m a rugby player)..who’s gonna say no to a midweek sesh.
Jack Woodward: I was busy playing at a wedding, but heard [Sweded] was our best performance so that’s positive going into the semi-final!
Calan Nickle (Hanover, Vocals): A couple of the [Hanover] boys are watching the game together at my house like we have the whole tournament.

At the studio recording our new single 😎

Jonathan Lord (Big Sky, Guitar): I’ll be watching it at home with my cats Colin & Sue. Dunno about the other lads; they’re a bit cooler than me so might go the pub or summat

Josh Petersen (Michigan, Bass): The most important member of @michigan_band is watching in Dubrovnik, Croatia – praying I don’t get my head kicked in when Harry Maguire scores an injury time bullet header.
Liam (The Winachi Tribe, Vocals/ lyrics): Normally 8 Stella and a lot of shouting at my Dog Winston when the opposition score (Winston doesn’t get football).
Alex Gray (Look Alive, Vocals): We’re all getting together to rehearse then watching the match together!

Does things feel different this time around and if so, why so?

Calan (Hanover): I’d say Sir Gareth’s managed to get the whole country behind the team like no other manager before him, I feel like we’d all given up on England so much that we just started cheering “it’s coming home” as a bit of a laugh but they’ve thrived off it and it’s got them further and further in the tournament.

Gareth Roberts (Man and the Echo, Vocals/Guitar/ lyrics): I think it does, because its such a young vibrant group, they seem to be enjoying each other’s company and they’re not weighed down by the baggage that other teams have been..We’re not overly reliant on one key player. They’re the most likeable England team I can remember.

Andy (DK): Yes – there is a lot less negativity this time when it comes to how people talk about the players. The team feels like they’re playing well together and the fans are getting behind them. It’s also different because this is the first time we’ve made the semi-final in my lifetime!

Kerry Sheree: I only watched for the first time England vs Sweden at Hernandos. It was ace…and I’m now mega excited as I know they haven’t been this far within my existence..

Has England’s progress affected the band in any way?

Emma-Rose Davies (Scratch): We played feathers sat night after the win & the crowd was absolutely jumping!!! Such high spirits in through the venue it was incredible for us.

Dan Dolan (Phase3, Vocals): We have our EP launch in Manchester on Friday and with a polish drummer and Irish guitarist, they have been moaning at us for moving practices around haha!

Gareth (M&TE): Well we start our first recording session for the new album at the end of the month and we probably haven’t been preparing for that as rigorously as we could. It will be fine though, we’ll just turn up and busk it.

When it comes to football, does anybody in the band have any superstitions?

Andy (DK): I don’t have too many superstitions when it comes to football. I hate listening to games I care about on the radio, because I think it’s harder to judge which way the game is going. And when I go somewhere to watch a game and my team loses, I won’t go back to that place.

Alex (LA): I’ll be in my England shirt! First time watching it together so no doubt we’ll make new ones!

David McFadden (Evila/ Thoughtune Ltd): Not as I can recall, I don’t like to tempt fate by saying something is not going to happen.

Gareth (M&TE): Joey is (practically) Italian, but he sticks up for England as well because he lives here, so as penance, every time he cheers for England he self-flagellates, shouts “Calzone!” and then eats a meatball. It’s distracting.

Anybody in the band had a crack at playing Three Lions during band practise?

Olly: Well my bassist can’t stand it. Rugby player through and through so no Three Lions for us. My drummer has been in Warrington town with a snare and drumming in the crowd. There’s a video up somewhere of him doing so.

Gareth (M&TE): We haven’t practised since the tournament started, there’s been football on every day. But we definitely could, we can play anything, ask me Mam!

David Hindle (Kula Bay, Guitar/ Vocals): Gareth Southgate spoke to me in a dream and told me it’s coming home – I hope that answers the question 🏴󠁧󠁢󠁥󠁮󠁧󠁿🏴󠁧󠁢󠁥󠁮󠁧󠁿🏴󠁧󠁢󠁥󠁮󠁧󠁿

Andy (DK): England could well beat Croatia to get to the final, but it will be a bigger task to beat either of the teams we could face there.

Olly: I wanna say it’s coming home. But can’t put a straight prediction down. All about step by step. Let’s just hope they get through the semi final first.

Gareth (M&TE): I have gone from just planning to enjoy it, to being cautiously optimistic, to submitting plans to Warrington Council for a Jesse Lingard Statue.

Jack: The positive part of my brain thinks we can beat croatia and beat france and just do it, only 2 games, I’d have a lot of respect for the team if that happened.

What’s your first gig that you’re going to this year?
We are very happy to announce our first guest in the WAM Exposure studio next week will be none other than @marcus_man_music It's the first time in almost 7 months we've been able to have guests in with us, so we're very pleased!
WAM Exposure GOOD NEWS/ BAD NEWS
🚨 JUST ANNOUNCED 🚨 Here is the brand new A-List for local artists to be played throughout the next fortnight on @radio_warrington . We aim to play at least one a hour (unless it is a specialist show). Which of these is your favourite!?
A shout out to all those who support local music in their area.
Yesterday @crawlersband surpassed 10,000 streams on their latest single, 'Statues'.