The essence of Rivfest is to provide a platform for emerging talent, inspired by Viola Beach.

Warrington has a thriving music scene yet most of the homegrown bands have to venture further afield to Liverpool, Manchester and beyond to make their voices heard. Rivfest aims to bring the best emerging talent from across the North West to Warrington for two days of Live Music. We urge the music fans of Warrington to support live music in their home-town and to discover new favourites in their own backyard.

Amazing events like the Neighbourhood Weekender and Creamfields have placed Warrington firmly on the Map for world class live events. Rivfest is different though, it’s a place to see the best that Liverpool, Manchester and the surrounding areas have to offer from the grass-roots music scene. These are the artists about to explode. These are the artists on the verge of something much bigger. 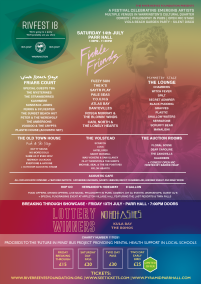 The festival kicks off with a very special showcase event on Friday 13th July at the Parr Hall, Lancashire’s own The Lottery Winners have spent the last 18 months perfecting their debut album for Sire Records at some of the best UK studios including the legendary Rockfield and Parr Street studios. Recently they’ve supported We Are Scientists and Sleeper and they’re itching to get out on the road again. The Breaking Through Showcase will be the Lottery Winner’s biggest headline show to date and will be the first chance to hear the incredible material from their new album. There’s a huge buzz in the music industry around this three-piece right now and fans eagerly await their forthcoming releases.

Support comes from Manchester’s NO HOT ASHES, another band with a well deserved hype and a massive buzz with numerous festival appearances booked already this Summer including, Dot to Dot, Sound City, Truck Festival and Kendal Calling. No Hot Ashes played a sold-out headline show at Manchester’s Academy 2 earlier this year. This is a band destined for great things.

Kula Bay, local Warrington favourites have built up a following at a rapid pace. Since forming in the summer of 2017 the band have self released two singles and attracted a great deal of music industry attention leading to radio plays on 6music and live sessions for BBC Introducing Manchester. David Hindle, lead singer of the band won the Viola Beach PETT Scholarship award presented by Priestley College this year in recognition of his songwriting talent and potential.

The Bohos are the final band to be added to the bill this year for the Breaking Through Showcase. Similarly the Bohos have attracted a huge amount of attention in their hometown of Liverpool this year with a sell out show at the Liverpool O2 Academy followed soon after with a hotly tipped show at Liverpool’s Sound City. The band have recently played dates with White Lies, Black Honey and Brighton’s latest breakthrough act The Magic Gang.

We’re right in the middle of Liverpool and Manchester and musically that’s what defines us as a town. We get the best of both worlds with the UK’s most iconic music scenes practically on our doorstep. Imagine what it would be like though if they all came to our house for tea, just for once?

The Breaking Through Showcase promises an explosive line-up of chart ready indie anthems for a new generation of British music lovers. See them here first.

📢 ANNOUNCEMENT 📢
After 3 years, 6 practise rooms, 2 studios, Psychsdelic Garage Rock Band, @prayformojouk have released their debut album, ‘WELCOME TO MOJOPIA’.
Jam Nights at the @the_post_house all musicians welcome, Every Month Start 8.30PM.
LOTS of exciting events happening in 2022! Who are you hoping to see playing in Warrington, Widnes and Runcorn next year? We're excited to see who will be playing @officialrivfest and who will be joining The K's and Crawlers as the scenes "Next Big Thing!"
We made it to 7k streams before end of the year. Track was played on @radiox , @bbcradiomanchester / @bbcintroducingnorthwest , @bbc6music . It even went on the telly on @granadareports & @bbcnorthwest . It went on @nmemagazine and it raised money for charity. It helped keep the #ViolaBeach memories alive. I’ve no doubt it helped show people how talented the boys that song were who didn’t know 5 years ago when they were tragically lost. Proud to help nurture it. Thanks to @cal_bate , @iamjessicaluise & @pettymusicpr the almost dozen extra musicians involved aswithout them, it wouldn’t have been possible! #boysthatsing
Ending the year how we started it. A BRILLIANT live version of Glass Houses by @theunomas , recorded at @edgerecstudio to celebrate the release of Issue 4 of [WAM] Magazine.