The festival’s founder Ben Dunne has put in an application for an event licence to host the event at Bank Park on July 14.

RivFest launched at Priestley College in July 2016 in memory of River Reeves.

The Viola Beach guitarist, along with his bandmates Kris Leonard, Tom Lowe and Jack Dakin, and manager Craig Tarry died in a tragic crash in Sweden.

RivFest ’18’s line-up will be unveiled on February 13 to mark the second anniversary of their deaths.

“We will retain the family focus of the event with two stages including The Viola Beach Introducing stage and large family village.” Says co-founder, Ben.

All profits from the festival will go to the River Reeves Foundation which helps young people realise their dreams as musicians and performers through grants.

The plans mean that Warrington will see three music festivals in 2018. The other two are the Neighbourhood Weekender at Victoria Park on May 26 and 27 and Warrington Music Festival in the town centre on dates yet to be confirmed.

Bank Park has previously hosted many music events over the years, including various stages for the Warrington Music Festival such as the circus big top stage in 2014, as well as the both Warrington Festival’s which saw the likes of Pixie Lott and Starsailor play to thousands. 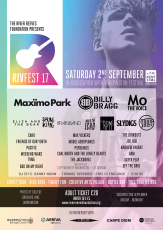 This years RivFest saw over 3000 music fans descend onto the sports fields of Priestley College to watch the likes of Slydigs, Eliza and the Bear and Maximo Park.

Find over 30 videos from RivFest here

View photos from the Festival here