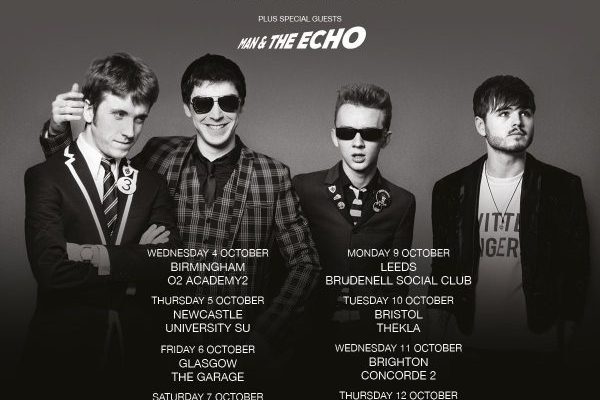 Alternative/ Indie four piece, Man and the Echo from Warrington will be touring the country this October as part of The Strypes ‘Great Expectations’ Tour.

The band who released their debut album in November 2016 through 1965 Records, have previously played with the irish four-piece through June-July.

It will also prove to be a busy autumn for the Man and the Echo as they have been added to Manchester’s Neighbourhood Festival, playing at the Refuge Basement on Saturday, October 7, at 9.30pm. This follows their hometown performance at RivFest at beginning of September.

Selected Man and the Echo Tour Dates are as follows

If you’re going to any of The Strypes tour dates, expect some of this

and a little bit of

On Saturday 2nd April 2022, @wazzapunx will be bringing you a day of banging punk, ska, thrash, hardcore, rock and more at @friarscourt 2.
To celebrate the release of the brand new single by @32tens , which has just been added to the ‘All New Rock’ @spotifyuk playlist (congrats!), we have two pairs of tickets to give away for their show supporting @prosemusic on the 29th January. Don’t delay, the competition is only on until midnight Monday. All you need to do is...
Tonight is the return of Asylum to FC2! £3 on the door (18+/ covid pass required) #asylumwarrington #alternativeclubnight
On today’s [WAM] Exposure on @radio_warrington (6-8pm) we have the first play of the band new single by @32tens , PLUS(!) new music from @roughneck_riot , @prayformojouk & @kerryshereemusic as well as some of our other favourites from Warrington, Widnes & Runcorn. Be sure to tune in! #communityRadio #unsigned #warringtonmusic
Here’s the one we’ve been waiting for! Kool aid, the new single by @urbanparcs , out 7th feb!
📢 ANNOUNCEMENT 📢