Ahead of Voodoo Blood making an appearance at this years Bloodstock Music Festival on 10th-13th August, we spoke to Warrington’s very own Voodoo Woman, front person Kim Jennett, about her influences and bands rapid rise. 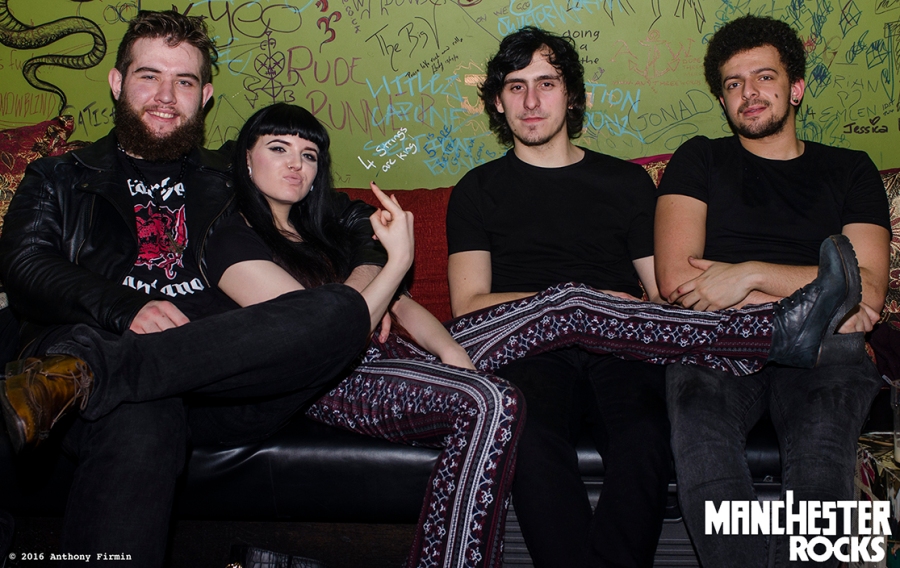 There isn’t many artists who can transition from supporting the likes of Scouting For Girls, to playing the famous Bloodstock Open Air in Derbyshire, via the Royal Albert Hall. But for Kim Jennett, originally from Stockton Heath and her band-mates Chris Norris, Sean Owens and Will Lewis, they soon found themselves playing the Iconic venue as part of the Music For Youth Proms in November 2015 concert.

It has been nonstop since and the band who play razor sharp blues inspired rock, owe their Festival appearance to taking part in the annual Metal 2 The Masses competition which gives unsigned bands the opportunity to play the metal festival.

We caught up with Kim as they prepare for one of their biggest dates yet.

[WAM]: Initially Voodoo Blood started as a name the band disliked, now your stage personas and image are influenced by it. How important has that been for you?
Kim Jennett (KJ): Yeah the name has helped develop the band really… I’ve taken on this “Voodoo Woman” character on stage and that’s a big part of our live performance for me. I feel like the voodoo woman is a big part of my life as well, she really allows me to let go on stage and channel a lot of my inner frustrations in a positive way!

[WAM]: What are your influences when it comes to Voodoo Blood?
KJ: We all have many different influences in voodoo blood, mainly coming from old school roots and blues at the core.

On a performance angle I take a lot of inspiration from the theatrical aspects of bands like Ghost. (Who are headlining Bloodstock this year, so I’m ecstatic to be on the same lineup as them!) On a musical angle I love anything with balls, from Beth heart to Pantera. If I can hear someone sing a song, and I know they mean and feel every word that’s coming from their lips then that’s it for me. it’s about that expression, I can relate to that and I use a lot of that in Voodoo blood.

[WAM]: You entered Metal 2 The Masses and were invited to appear by Simon Hall (Metal 2 The Masses co-ordinator) after making it to the Manchester final. That must have a been a great conversation?
KJ: Yes when he announced that he was taking two bands too bloodstock this year I was buzzing, we all screamed when he said it was us going through. Big ups to Simon for giving us this opportunity, hopefully this is the start of something very exiting! Well it has to be because it’s the only thing were good at haha.

[WAM] Who are you looking forward to seeing at Bloodstock?
KJ: Well as I said before I am a huge ghost fan but I’m super chuffed that a lot of my friends are playing too and bands we have played with before…Twisted Illusion, Red Rum, Prognosis, Ward XVI and Silver Child! There are loaaaads of amazing acts though this year I could be here all day!

[WAM] Tell us about your live shows?
I am all about the live shows, it’s defiantly one of my favourite aspects of Voodoo Blood. High energy, emotive, and theatrical. We said from day one we didn’t just want to play a gig we want to put on a show. We are going to start interpreting this even more by pairing a storyline along with the music that you will learn more about if you watch this space!

[WAM]: Prior to forming Voodoo Blood, you were a performing as an acoustic singer-songwriter, do you miss it and is there much difference/similarities between the two, away from the actual music?
KJ: I feel like I’ve really found my calling with voodoo blood I don’t miss the singer songwriter thing at all. I actually had a really bad year just before the band formed were everything in my life seemed completely out of control, I think it really toughened me up and the performance I giver in Voodoo Blood is a reflection of myself. The chilled out care free singer songwriter isn’t me anymore, playing music like this gives me some sort of control and power in my life. The scene is very different but I feel truly at home here.

[WAM]: Your new single is released on 20th October, can you tell WArringtonMusic.co.uk more about it? Is there a release show?
KJ: My lips are sealed for now. All I can say is we have a huge announcement on the way when we are at bloodstock!

Bloodstock Open Air weekend tickets have sold out, with limited day tickets available on the website

On tonight’s WAM exposure (thur, 6-8pm), we have Liam & Joe on the show from @foxgloveband .
Set times for Friday! @mychemicalromance , @frankturner , @starcrawler & @crawlersband .. what a lineup!
A WHOLE decade ago today, Monday, Warrington was at the very centre of the world music industry’s attention as the Stone Roses played their first show in 16 years at the Parr Hall.
so @nbhdweekender stage times are now live on their app.
On today’s [WAM] Exposure from 6pm, we have @scottlaywood1 from Scott & the Flying Kicks on the show!
Work has begun on the @nbhdweekender site. Every year I come for a wander and every time I walk into the Festival and it’s unrecognisable!