Today is jam packed full of artists of all genres and taste, why not give the bands a listen below and find a new favourite. Like something you hear during the festival? Come back to the videos to explore more.

Remember it is free all day and no ticket is required!

talented St Helens band who won Warrington Guardian’s Hotwired competition in 2013. They have just worked with Johnny Vegas on their latest video

Electronic pop trio who popped up on ‘Made In Chelsea’ recently

with one foot in 1960s LA and and the other in mid 1990s Manchester, Sweet Release are working to create a new, edgy blues sound for the 21st century

ones to watch. Polished indie pop band who have had lots of support from BBC Introducing

blues rock with plenty of swagger

young band from Warrington who are tipped for big things

fresh from a coveted slot supporting The Ordinary Boys, The K’s are an ambitious four-piece from Newton

Sam Allen and Matt Morley met at Priestley College’s performing arts department and went on to work with the likes of Steven Spielberg and Johnny Depp. Now setting their sights on the music industry with their Americana sound, they named their band after the college which had a big impact on them

melodic indie pop who have been making their mark on Spotify

with Influences such as The Kooks, Catfish and the Bottlemen and The Wombats, Fez create indie pop perfect for summer festivals

one of festival organiser Steve Oates’ top picks for the weekend.

He said: “I met Myth of Unity in their Blackpool studio a few weeks ago. They played me an original song that made the hairs on my arms stand on end. The song was called ‘Hometown’ and I hope Myth of Unity get a great welcome to ours on Saturday.”

a bright young man with a first class honours and masters degree who delivers performances which are well crafted and precise. 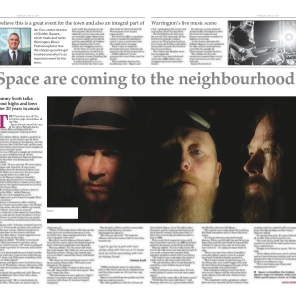 If you still want to know more about this weekends artists, Warrington Guardian have put together a fantastic 12 Weekend special with interviews St Helens stalwarts Stillia and Weekend Wars, who are coming a little down the motorway to play, as well as an interview with headliners, Slydigs who mix the 9-5 with performing Arena shows supporting The Who.

Have you downloaded the Free Warrington Music Festival Compilation yet?

Now then! Who’s looking forward to the return of live music? Might be able to get in a mosh pit before the height of Summer!
Happy Birthday to @ianbrown ! Orford’s most famous son, he’s done too bad for himself. Hopefully we can get to see him perform live for the first time in years at @nbhdweekender in 2021 🤞 #ianbrown #stoneroses #thestoneroses #warrington
Has it really been six years since @roughneck_riot gave us the crossover we didn’t think we needed? We’ll stick a link onto the fb page! #roughneckriot #robotwars #punk #warrington
On today’s WAM Exposure we pay tribute to the boys that sing, @violabeach . As well as tribute messages from local artists we will be doing a full album playback of the #1 album, as well a couple of tracks that didn’t make it onto the CD.
So, we’ve just found a signed copy of [WAM] Magazines’ @manandtheecho issue.
Happy Valentine’s Day 🥰