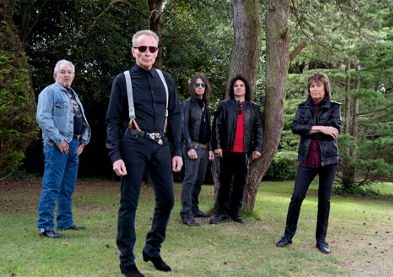 The tour, which calls at Warrington on 26 October, will showcase A Conspiracy of Stars, the band’s 22nd studio album, as well as some old favourites.

This is the first time in more than 20 years the British band have recorded an album in their native country and it exudes that typically British easy-going confidence for which the band has been known for more than 45 years.

A Conspiracy of Stars is described as a “strong release” consisting of 11 songs which combine everything the group stands for: meaty riffs, distinctive hooks, diverse song-writing and intelligent lyrics.

The fact that the album was produced and mixed by Chris Tsangarides, of Judas Priest, Thin Lizzy and Gary Moore fame, adds to the success of the recording and sees UFO prove that past and present can be blended.

Even in the seventies, the band distinguished themselves with their own, unmistakable style, touching a nerve among their following with rock numbers like Prince Kajuku, Follow You Home and C’mon Everybody from their albums UFO 1, Flying and UFO Live.

Tickets are on sale now at £22.50 on the Pyramid Parr Hall Website here