Viola Beach’s debut album has entered at Number 1 on the Official Albums Chart, as fans pay tribute to the band this week.

In February this year, the four members of the Warrington band and their manager were tragically killed when their car fell from a highway bridge into a canal in Stockholm.

In memory of vocalist Kris Leonard, guitarist River Reeves, bassist Tomas Lowe, drummer Jack Dakin and their manager Craig Tarry, the families and friends of the group have released the band’s self-titled collection – and today it officially claims the top spot.

The families of the band and their manager said in a statement:

“The tragedy that ended Craig, Jack, Kris, River & Tom’s lives in Sweden and the pain and sense of loss will never leave us. By sending the Viola Beach album to Number 1 the public have sent out an important message to the world.

“For that, we will be eternally humbled and ever thankful to every single person who by buying this glorious album has invested in their lasting musical legacy. The pain will never leave us but neither will the affection shown by every fan. Maybe one day that affection will live longer in the memory than the pain.

So from us all, a simple but heartfelt ‘thank you’.” 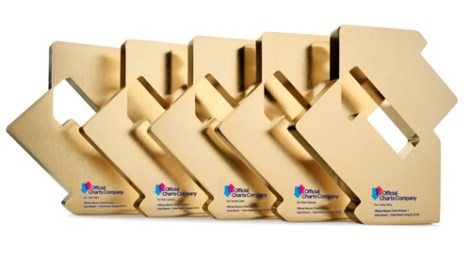 Martin Talbot, Chief Executive, Official Charts Company, said: “It is hard to think of an album which more people were rooting for than the Viola Beach release – nor a success which has felt so bitter-sweet. We (and the wider music community) are delighted that it has taken the number 1 spot – but it is an awful tragedy that Jack, Kris, River, Tomas and Craig are not here to see themselves take a place in the annals of British music.”

Viola Beach’s album features nine songs, including the track Swings and Waterslides, which entered the Official Singles Chart at Number 11 following the news of their untimely deaths.

Since then, a number of acts have paid tribute to the band, including Coldplay’s performance of their track Boys That Sing during their headline slot at Glastonbury in June.

The Posthumous release by the band outsold the number two album, ELO’s All Over The World, The Very Best Of, by about 6,000 copies, said the Official Chart Company.

“I’m in shock,” said Finn Reeves, whose brother River was the band’s guitarist.

“I think they’d be absolutely thrilled. I can see the smiles on their faces.

“They made this happen. They did the hard work.”

Loren Dakin, elder sister of drummer Jack, said listening to the album took her back to the pubs and clubs where she watched Viola Beach play as they started to gain a foothold in the music industry.

“It’s very sad – but it’s also beautiful,” she said. “I can hear my brother drumming, I can hear Kris singing. It’s like their legacy lives on.

“Sometimes I am quite destructive with the music, because I’ll listen to it when I’m sad and it’ll make me feel worse.

“But a lot of times I’ll listen to it with friends or when I’m in an upbeat mood and it’s beautiful. It’s great music and they wanted everyone to hear it.”